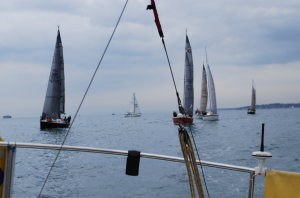 What a weekend! The 5 impalas in the JOG Yarmouth race had some close racing, surviving numerous groundings, a plague of flies, strong adverse tides and not a lot of wind. Well done to Imptish who won the race to Yarmouth via Portsmouth, finishing a minute ahead of Polly, followed by Magic, Two Frank and Vlad the Impala.

The race home saw very little wind and lots of tide. Some boats discovered that the island shore is much rockier than the mainland shore…
Polly was first, with Imptish next ahead of Two Frank, Magic and Vlad.

You couldn’t ask for closer racing or a more friendly fleet. See you all on the startline of the RTI in two weeks’ time and for the David Thomas regatta the day after…

Cowes to Yarmouth – Imptish, Class 6
This weekend racing to Yarmouth on Imptish had a family feel with three members of the Tullett family onboard, co-owner Graham, his dad Nigel and brother Gavin.  The Tulletts spent Friday night onboard so we able to leave Hamble bright and early on Saturday morning enjoying bacon sandwiches on the way across whilst discussing which of the many weather forecasts spotted during the week would be accurate.
On arrival at the gate it was great to see five Impala’s forming a big part of class 6. The Hamble fleet of Impala’s is going from strength to strength so watch out JOG you may find even more of us on the startline in future.
Whilst it took a while to get going from the start line, the leg to North Sturbridge was somewhat uneventful with the only excitement coming at the end when we almost went the wrong side of the  the mark. This was due to a certain amount of miscommunication between the navigator and the helm., something which became a theme of the weekend!
This author spent most of the leg to Hillhead with his head on the leeward side trimming the kite so I didn’t take much part in deciding tactics. On arrival in Yarmouth we were told we were ‘lucky’ to pull out a reasonable lead over the rest of the fleet before the transition by staying offshore in stronger tide. We’d like to say that it was all carefully planned and we knew the wind would last, honest! Exiting the transition into 15 knots of breeze directly from Yarmouth was a shock to the system and we quickly realised that we a) needed more clothes, and b) some lunch. Pork pies and delicious homemade caramel slices (thanks Laura!) were served.
A minor speed problem saw Polly close up and finally pass us at Calshot. By dint of pulling various strings harder (and swapping helms) we began to reel them in again and spent a very enjoyable hour short tacking up the Lepe and Beaulieu shore never more than three boatlengths apart.  I’m not sure if this is normal behaviour in a JOG race but I spotted at least one dummy tack from Polly as well as a certain amount of (very) close covering from both boats until the fun was ended when Polly attached herself to the sand for a couple of minutes. Strangely this almost helped her win the race as once off the bank she immediately headed for the Island shore and we carried on for another 500m before following. We then ran out of wind near the finish and struggled across after four very slow tacks, all within touching distance of Charles Stanley. A nerve racking minute followed as Polly stormed in from the Island shore with the last of shore breeze. We timed the gap at 1min 5s and knew it would be very close on handicap.
A somewhat shattered, and rather hungry crew, headed into Yarmouth to be met by the ever welcoming Harbour staff who are never knowingly phased by the volume of boats arriving. We rafted next to the Sigma’s and close to fellow Impalas Magic and Vlad which led to a small amount of banter. A convivial evening in the Royal Solent and the Wheatsheaf followed, made even nicer by discovering that we’d won our first ever JOG trophy, beating Polly by 3s (to be precise 2.617s) on handicap!
Yarmouth to Cowes, Imptish, Class 6
Imptish’s crew were rather tired on Sunday morning. An impromptu party on With Alacrity had led to sore heads for both co-owners and a certain amount of snoring meant a couple of other crew had had a rather broken night’s sleep. It is quite possible that this was the cause of our position at the start gun, 50 m upwind of the line arguing about whether we’d just heard the 5 minute. Not a good place to be.
A rapid trip back to clear our OCS put us in mid fleet and some smart tacking rapidly pulled us into the leading bunch. Unfortunately we rather spoiled it all by then taking two extended absences from racing, the first on a unexpected bit of sand to the East of Yarmouth (I can sell you my annotated chart…) and the second after investigating the surface of the ledge next to Saltmead due to a helm refusal to tack as he wanted to finish his hot chocolate. At least we now know that 5 people on the leeward side is enough to get an Impala out of almost any situation!
Despite our time outs we were only five mins behind Polly at the finish, and finished third overall behind Polly and Blazer on corrected time. A lovely sail home with cheese on toast cooked by Father Tullet followed.
Thanks again to Peter for some excellent race management. Successfully getting us all to Yarmouth in time for dinner on Saturday must have been challenging (and probably rather nerve-racking when the entire fleet was parked off Lee-on-Solent at 2pm!)
Categories: Race ReportsSouth Coast