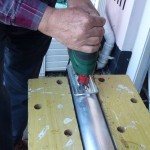 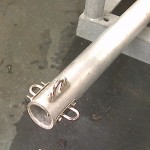 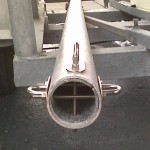 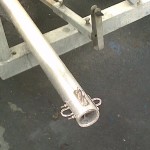 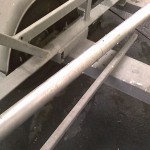 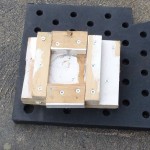 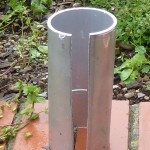 This was made is bit of hurry. After we decided to get the boat trailered back to Plymouth instead of sailing I figured that for the cost of the single mast lift (at QAB they make you employ a rigger as well as their crane), I probably could build a mast pole. But I only had four days to buy the tube and finish it before getting back to Hamble for the Championships.

Luckily I was able to draw on my extended apprenticeship at Bodgit and Scarper to get the job done on time, in budget, albeit leaving a few rough edges.

1.    Used 3” diameter alu tube. Probably could have used a smaller tube, but I lack the engineering knowledge to work out the stresses and strains to figure out the min safe size for the job.

3.    To join the tubes I first planned to make a sleeve 80cm long to give 40cm buried at each end. When I came to hammer the parts together I gave up at 30cm because I because it seemed so well bedded in, so the sleeve is 60cm.

4.    The amount to be cut out to get the sleeve small enough to fit was 25mm (one inch) see picture of cutting and part of the left over bit. If I had started with a piece 60cm long it might have workable to cut it by hand.

5.    Hammering the sleeve to reduce its diameter needed much more force than I expected, also very noisy, but I was doing it on the large hardstanding at QAB which is so busy with tractors, hoists and repairs no one notices someone hammering maniacally on a tube.

6.    Hammering the sleeves together was equally noisy.

7.    We are fortunate in having an industrial stainless steel fixings shop in walking distance so I had stocked up on  4” long 6mm bolts. I used two on each side of the sleeve, with nyloc nuts. You might think that bolting it like that would cause the tube to collapse, but with a wall thickness of 3mm, plus the sleeve, there is a total of 12mm. The sleeve proved to be completely solid. (Note I tried protecting both ends of the tube when I hammered it together, but the wood just caused the hammer to bounce and nothing moved, so the only way to make progress was to hammer the aluminium directly and cut off the deformed parts later.)

8.     Used 15cm of the left over sleeve to double up the end where I bolted four deadeyes.

I thought having got the pole made the rest would be easy. Wrong.

After Ben helped us get the mast down on Monday AM, we motored up to Deacons. The driver duly arrived with the trailer and Deacons hauled the boat out. They were on the verge of hooking the trailer to the Landrover when the driver got a call that his wife was in labour and at the hospital. He disappeared in a cloud of wheelspin and black smoke never to be seen again. They sent a fresh driver and car on Tuesday so the boat got back to QAB very late on Tuesday, so we had Wednesday to rig the mast before the first race on Thursday.

10.                  We rigged the pole using our spare 6 mm dyneema spi sheets. Next time we MUST have wire shrouds. Even a small stretch caused the whole rig to move alarmingly. The two forward shrouds were lashed to the stanchion bases which are between the mast and bows, the two aft shrouds to the midship stanchion bases. For next time and I have a couple of laser kickers which I will use the tension the aft shrouds.

11.                  The boat was in the water and with four heavy crew on board, plus a fresh cross wind we had to position three to work from the windward side otherwise the boat heeled a lot, exacerbating the above problem.

12.                  We found the CG of the was about 50 cm above the spreaders, and attached a line, around itself once, then ran the line down to the gooseneck to locate the strop.  The idea being that when the mast was up and secure we just  had to untie the line at the gooseneck and it would all come away without having to send someone up the mast to retrieve the strop. In the end this did work, but there was far too much stretch, so again we need about 5 mtr of wire for section from the gooseneck to spreader height.

13.                  We used some spare mainsheet blocks to provide the hoisting tackle,  then used a spi sheet, running around one the blocks at the foot of the mast then back to a genny winch.

14.                   The somewhat overlength pole came into its own as all this creaked and stretched, but there was still enough lift to hoist the mast high enough.

16.                  This gave rise to biggest single problem when hoisting, in that when the mast was about 10 feet in the air we needed to twist it so the spreaders could pass by the pole and the shrouds. This needed quite an effort. You would think it would twist quite easily but it did not. Maybe next time we will try to hoist it partly on its side as it were.

17.                  An alternative would be prior to hoisting move the mast so the spreaders were forward of the pole and place the strop under the spreaders, but then the mast would be very top heavy and need lots of manual labour to control it on the way up, with the risk that if anyone let go the top would crash down.

19.                   One thing we did find is that when the mast was originally put up by a “professional” rigger, they did not put a locating bolt through the mast foot and mast step. The mast had moved backwards until it came up against the shackle holding the boom vang then ground its way into that. I have put an M8 stainless bolt in, but already that has started to bend. There must be very strong forces pushing the mastfoot backwards. I think it must the loading from the spi pole, since all other forces are neutral or would try to push the bottom of the mastfoot forwards i.e boom vang, mainsheet, backstay.