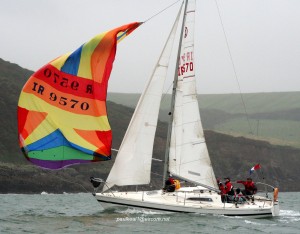 Downwind legs have traditionaily been the relaxing part of a race – but it is possible to make big gains, while your competitors sit back and relax. There are tive critical factors in improving downwind speed with a spinnaker.

2 Amount of Draft
The closer the leeches are together, the fuller the sail, so when you lower the pole the leeches get closer together, making the sail fuller. lf you want the sail flatter and projecting maximum area, raise the pole, allowing the leeches to loosen.

3 Fore and Aft Pole Trim
This changes the angle of attack on the spinnaker. When the wind is att oi around 130 degrees, the pole should be at right angles to the wind. When reaching, and especially power reaching, keep the pole back as much as possible to ensure the salt stays flat and pulling forward and not sideways.

4 Pole Height
Judge the correct pole height from the luff of the spinnaker. The luff should break first from about 60% up the sail to the head. If it breaks only near the head, the pole is too low and if it breaks well below the 60% point then the pole is too high.

5 Sheet Angle
Think ofthe spinnaker sheet as having the same effect as a genoa sheet – if you need power and little twist, move the sheet lead forward but not further than maximum beam, and if you need a flatter, more twisted shape. ensure the sail is sheeted from as near the stem as possible.
With correct spinnaker trim, the speed gains to be made downwind are significantly greater than the windward leg, so put the sandwiches and tins down and go for it.