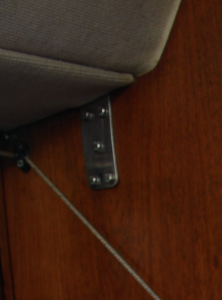 The original Impala chainplates, which can leak if not carefully sealed

Chris Roberts from Maverick writes: It is very common for the chain plates to leak. Both mine leak and have done so for some time. With the rig under tension and due to the chain plates being too short the 8mm bolts give and allow to plate to move upward breaking the seal at deck level.

I have had new chain plates made from 55mm x 5mm 316 stainless steel, only I had the length increased to 400mm at the recommendation om my boat surveyor. I also had small cover plates made which have been mastic sealed to the deck to give a larger seal area but still allow for normal expansion / contraction.

They were £60 and were made by a local steel fabricator who is a friend of mine, they came in natural finish so I had to polish them which was a pain but they look good. Their actual specification is 60mm x 5mm x 500mm long 316 grade stainless steel. They have two holes above deck for the rigging as per the original and 8 x 8,2 mm holes evenly spaced 2-1-2-1-2 for the 8mm fixing bolts. They were no trouble to fit, a little work around the slot in the deck was needed as the original was 55 mm x 5 mm and the slot was bodged full of epoxy filler and then silicone in a vain attempt to stop the water leaking in. 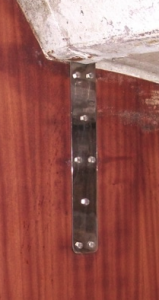 I have also had made a ss cover plate 50mm x 80mm x 3mm which has been welded to the chain plate leaving a 3mm gap between the underside of the cover plate and the deck. This gap has been filled with flexable mastic to form a good seal without preventing natural movement of the hull. It is important that any cover plate you use is not fixed to the deck as the expansion of the hull will cause stress fractures to the deck area surrounding the chain plate.

I’ve just finished sealing the chain plates on Atalanta. This year I’ve used “stick’s like sh*t”, yes thats the name of it, available from Jewsons. It works well in a wet enviroment and does what it says on the tube. When set it is very flexable. As I have posted before I have replaced both chain plates with longer and heaver guage items but it’s a fact of life that under loading there is a small amount ot movement.

PS: When mooring up, the forward spring invariably gets tied to the chainplates, which is the worst place to tie onto on an Impala as it can stress them unduly. Use longer springs to the mooring cleats instead!