10 boats ventured to Plymouth for the first official Impala championships since the pandemic, from the Fal in the West to the Hamble to the East for a weekend of Caribbean sunshine and light but fairly steady wind. The Impala fleet joined the J/24s who also chose Plymouth Regatta as their 2022 Nationals venue.

Race officer Sean Semmens, a former Impala owner himself, set some short but challenging courses in the light airs that kept the boats with good boat speed and top tactics atop the leader board throughout the weekend. Despite the threat of a swift use of the black flag the Impala fleet were well behaved, save for a few boats keen to get racing who were over the line in the first race!

The first few races set the tone for the rest of the event, with multiple lead changes, close racing and beautiful sailing conditions. Local boats Imelda and Impulsive tussled for the top spot on day one with Impulsive getting two wins to ease ahead. Visitors Polly snuck in a couple of thirds after a slightly keen first start which saw them OCS.

Saturday saw a short postponement before racing continued south of the breakwater – with only the small matter of a large ship anchoring just above the windward mark to test the race officer’s mettle. Imelda aced the first race with Impulsive buried in fifth, and Polly second, but Impulsive had their revege with two more wins that day ahead of Polly with 2,2,3. Behind her, Inca, just launched for the season was snapping at their heels and showing some impressive boat speed, while Zulu showed a consistent and improving set of results in 5th.

The final day dawned with a faint south-easterly that showed signs of shifting to the south. The breeze was struggling to make 6 knots, which meant that the Impalas were tangling with the back end of the J/24 fleet, but Polly slipped through to win the first race – just ahead of Imelda. In the second race of the day, Impulsive was snapping at Polly’s heels at the first windward mark, and slipped through with some slick manouvres and tactics to win the race and the event. With the breeze dying, AP over A was raised and the fleet headed ashore to the roasting heat of Plymouth Yacht Haven for the prizegiving.

Thanks go to the organisers and all the crews. Next year’s Nationals will be held in Hamble, dates to be confimed by the Autumn.

A number of boats are for sale: get in touch if you would like to join in the fun for some affordable, exciting, close One Design racing! 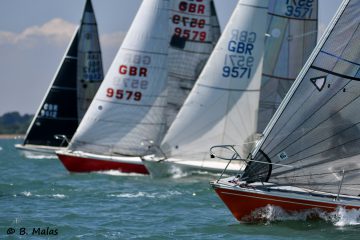