Ls started at the committee boat end of the line 2 seconds after the gun and tacked over immediately as planned.

It was blowing 15 knots, gusting to 20. With a No, 1 up and a flattening reef on it was all meat on the rail to keep the boat upright.
Hard work on the main, keeping her on the edge, easing with every puff….
When we reached the bricks we tacked back to starboard and crossed the whole fleet…
Rainbow was second. They had their No. 2 up with a less heavy crew, Taxi was third.

By TKS we were 10 boat lengths ahead, and extended our lead with a perfect hoist, hugging the old runway to KB.

When it started to look too easy, Ls decided to try a new nationality and do a Chinese gybe.
As we lay on our side Dave reported seeing water go in through the window.
Yan Pui was swimming in the harbour holding on for dear life.
The cockpit was full of water. Only Patrick stayed dry on the high side…
Rainbow reported that our bottom and keel was very clean and smooth as they passed us without pausing to offer any assistance…

We dropped the kite and dragged it into the cabin. Gybed back to port, rounded KB, hoisted the genoa and ran wing on wing to DB. Taxi tried but did not pass us with their spinnaker up.

We set off and gave chase to Rainbow. Got a bit closer at TKS, where we managed to hoist our kite again, having sorted the sheets and repacked the kite on the beat. We rounded DB just behind Rainbow, and passed them at GB after a few short tacks. They said we were lucky with the wind shifts, but we know we were brilliant …. After that it was cover, cover, cover. We overlaid the finish by a bit, but there was no way we were going to tack before Rainbow.

Beers came up with the gun & smoke …. followed by rum and coke at the pontoon… and I cannot remember what happened afterwards …

Ls = Lovable skipper, thought to be of the Scottish persuasion, owner of large yellow flag with red cat like animal embroidered on it, a blue and white spinnaker and an enviable collection of malts.

Bricks: a motorway built on stilts in the harbour 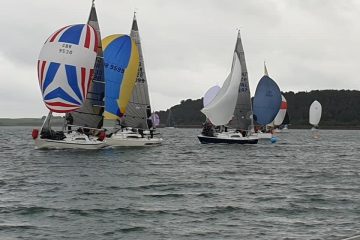 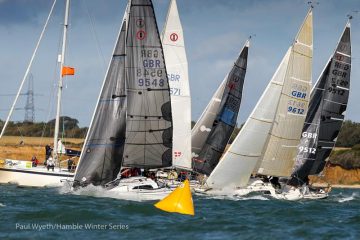