Well done to Bambi (Richard Harding) for their result as top Impala in the 2021 Round the Island race. Here’s the race in his own words:

“Eight Impalas joined almost 1,200 other boats in the 2021 Round The Island race, which offered a fantastic break from COVID, isolation, and working from home. The forecast always look to favour the slower and smaller boats, as a light southerly was expected to back to the southwest and build, and so it turned out, as the later finishers romped over the finishing line in a brisk 15knts plus to take the top positions.

The strong ebb tide, which the race officers flagged repeatedly, caught out a few boats at the start, who couldn’t get back from course side, but others, like us, started rather conservatively. Imptish made a great start, about 50 yards ahead and slightly closer to the Island shore. As the fleet were swept down the Solent, on port, we gradually managed to clear our air, bearing off and valuing speed over height.

Gradually boats tacked off towards the Island shore, maybe hoping to benefit from better tide. We stood on, in a great lane of clear wind, and eventually, having been one of the most right handed boats for some time, came back to the fleet on nice shift, to see Imptish now over 100m behind. We continued to work our way back from the right hand side on the oscillating shifts, always looking for clear lanes of wind. Then set up for the Needles.

We were always going outside the Varvassi, so I added a waypoint to the chart plotter, which I thought was comfortably beyond the dangers of the wreck. But as we approached, I was terrified to see how close the boats were who took the gap. Still, I held my breath and we edged past.

As we bore off, many boats opted to hoist their spinnakers, heading inshore to where the adverse tide would turn first. We though decided to sail the shortest distance and put the No 1 genoa on the outside track. This seemed to pay, and it was certainly the more boring and comfortable option, as we even managed to pop the kettle on for a hot drink! At St Cats, more spinnakers went up, including ours, and we again concentrated on sailing the most direct route, whilst others headed offshore to benefit from the tide which had now turned to the east. The view behind was amazing as the whole horizon seemed to be covered with spinnakers.

Bembridge, was more relaxed than than in 2019 and we got round cleanly, as the fleet behind split to avoid being mown down by the incredibly speedy Jolie Brise. We kept towards the island shore, with the now indispensable chart plotter showing us the edge of Ryde Sands.

From there it was a long fetch then to the finish line, with the breeze building. Dirty wind and gusty conditions over the last few hundred metres of the course kept us on our toes, and even necessitated a crash tack on the line as we finished at 15.45.

It was a day that had everything, fog, rain, sun, drifts, big gusts, great competition and delicious food. Well almost everything, looking back, we didn’t do a single gybe in the whole 8 1/2 hours! Back on shore we were thrilled to see that we were first Impala – the most important result of the day – and delighted to have finished at all after abandoning our one other attempt in 2019.

A great day’s sailing which was finished off with a few beers, a steak dinner and a fantastic victory for England in the Euro Championships!” 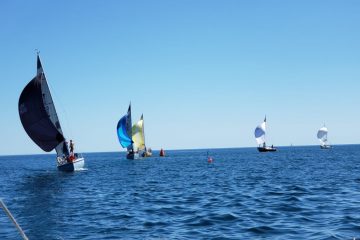 10 boats ventured to Plymouth for the first official Impala championships since the pandemic, from the Fal in the West to the Hamble to the East for a weekend of Caribbean sunshine and light but Read more…