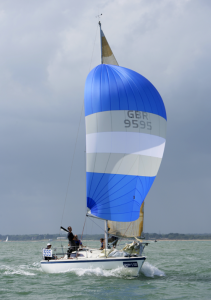 On the East Coast

About ten years ago, there was a really good fleet of Impalas on the East Coast, and an entry of approaching twenty boats contested a European Championship which was hosted by Royal Temple YC as part of Ramsgate Week. That event was won by Jiminy Cricket, then owned by Mike Harrison from Burnham-on-Crouch. However, only a few Impalas now remain, with Julian Lord’s West Mersea based Scallywag perhaps being one of the most actively raced boats. She won the season-opening Mersea Spring Series from a Melges 24 and a Cork 1720. The most competitive racing at West Mersea is now the Dabchicks SC hosted 14 race Friday Series, which runs from early May until early August, and sees regular turnouts of 20-25 boats. After the first five races, Scallywag leads the series, but it’s early days and with only eight races to count, the same Cork 1720, a Smokey 25 mini tonner, a J80 and a J70 are amongst several boats which could feature in the overall results.

What’s going on where you are? Let us know!

News from the Humber

Good to see 2 Impala’s racing at the recent Grimsby and Cleethorpes Yacht Club regatta on the Saturday and Sunday of the August Bank Holiday. There are 3 Impala’s in the Humber area including Lifjetti Read more…

Here’s news of another boat undergoing a full refit – this time on the East Coast! Edward Harrison writes: ‘Alchemy (ex Ohh Deer!) moved to the east coast and has had some much needed Read more…