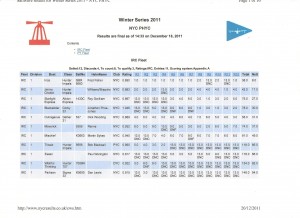 It’s not only on the South Coast that Impalas are still dominating the racing results. John Williams from Pembrokeshire writes: Thought I would send the results of our recent 2011 winter series, as you can see it was totally dominated by Impalas, with Inca being totally dominant, no excuses they sail it incredibly well – Fred Fisher who owns Inca has had her since 1985!! But it was nice for us to be able to regularly beat a modern Corby.

Not bad for a class that’s three decades old!

News from Wales, where Inca, Jiminy Cricket and Apollo recently took place in the Dale Weekend bank holiday regatta. John Williams from Jiminy Cricket writes: ‘We competed in IRC 2 with the other Impala, Inca, Read more…