The Autumn series at Royal Western is now in its fourth week – 8th race. Wisecrack (Roger Stanbury) and Zulu (Kevin Palfreeman) turned out for the first Sunday (18th Sept), and have since the 25th have been joined by a revitalised Imelda (9510) skippered by Robert Boalch.

Robert started with a first, then achieved that rarity of a fourth equal on corrected time (with an X99). Wisecrack and Zulu have not been doing so well, but since Robert started beating them by miles, they have raised their game, and by last Sunday Impalas were 2,3 & 5; then 1,2,3.  With Robert leading but with the gaps down to a minute apart.

Level racing is so much more encouraging than sailing around with a group of different classes, with involved and inconclusive debates about how much time who owes who.

Nothing untoward reported from Wisecrack and Imelda, but Zulu has been finding normal racing a bit bland, so on Sunday 2nd Oct managed whilst on starboard gybe to get rammed by a boat on port gybe, with the spinnaker pole and a stanchion base totally destroyed and the starboard cap shroud needing to be replaced. Fortunately no one hurt (only three on board) and the mast stayed up. Swift work by Allspars fixed the shroud and replaced the spi pole, plus some timely work from messrs Heath and Robinson on the stanchion base got the boat ready for the next Sunday.

Last Sunday between races the starboard winch drum helicoptered off its base, so we did the second race on the port winch. Actually this has happened before, and providing we can always get six strong crew, and keeping in mind that new winches cost an obscene amount I am thinking that we might just scrap the winches and have three of the crew heave the genny in when tacking, dinghy style x 3. On second thoughts the alcoholic inducement that would require will exceed the cost of the winches. 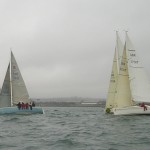 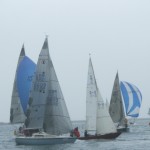 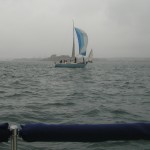 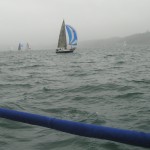 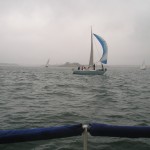 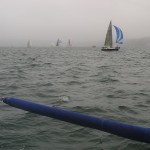