Putting the ‘Winter’ in the Winter Series 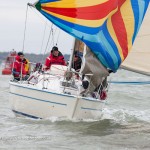 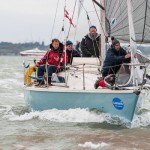 After Saturday’s gales and near-zero air temperatures, the four Impalas racing in IRC 4 in the Garmin Hamble Winter Series were relieved to find a more sedate 11-17 knots from the NW in the Solent yesterday – but it was still  cold!

Polly and Imptish plumbed new depths with poor starts in the first race, but recovered to take 2nd and 6th respectively, behind 1/4 tonner Menace. Trudi was fourth, and Magic 7th.
Things were very close in the second race of the day, with a few individual recalls as boats tried to make up for the first race’s startline shyness. Polly was second, with Menace once again taking first place. Imptish was fourth, Trudi fifth and Magic sixth – with only 2 minutes separating the four Impalas.

There’s a break next weekend, before the series resumes on 11th November. It looks like we’ll have some close racing!

What’s happening in your part of the world? Let us know!