Well done to all the Impalas who made it round the island in very little breeze on saturday. Imptish sailed a blinding race to finish 8th overall in IRC, with Firebird in 18th, Polly in 45th, Scallywag in 85th and Curved Air in 121st. Luckily it was the longest day! Report below from Imptish; ‘

8 Impala’s had a go at the 2014 Round the Island Race on Saturday. We started in the ‘Turquoise’ IRC group at 0730, the third and last start for the 500 IRC boats. There were also around 1100 other boats competing, including a couple of foiling catamarans on which most of the pre-race publicity focused. The pre-race publicity also focused on the ‘poor’ forecast of very little breeze. However it was sunny!
The beat to the Needles was rather slow as the forecast SE turned into 6 knots of breeze from the W. Imptish, Scallyway, Cheeky Monkey, Polly and Firebird we spotted at various points near the front of the Impala fleet. By the Needles Imptish had eeked out a small lead over Scallyway with most Impalas choosing the inshore passage between the rock and the wreck, both of which were helpfully signposted by boats stuck on the top of them…
The trip down the back of the island was rather calm, most drifted for 90 minutes off St Cats, and the main choices were a) when to have lunch, b) how much suncream to (re) apply, and c) whether to go inshore or offshore. Imptish tacked offshore at St Cats and made a break for it, eventually hooking into a 10 knot South Westerly for the leg to Bembridge. After Bembridge we headed inshore over Ryde Sands ( 0.0m under the keel) before meeting some arguing sea breezes off Ryde. For most this led to a frustrating couple of hours covering the last 4 miles to the finish…which was reached at 1835 by Imptish (11 hours 5 minutes after the start), 1900 by Firebird, 1920 by Polly, 1941 by Scallywag and 1959 by Curved Air. Trudi, Cheeky Monkey and Burhou sadly didn’t make it round. For reference Polly and Imptish got round in just over 8 hours last year, and the aforementioned foiling catamarans took over 8 and half hours!
On IRC the Imptish crew were stunned to come 8th overall on handicap and Firebird were in the top 20 (18th overall). Ben Ainslie (another major feature of the pre-race publicity) was 335th overall. Over half of the large fleet failed to make it round.
Categories: Race ReportsSouth Coast 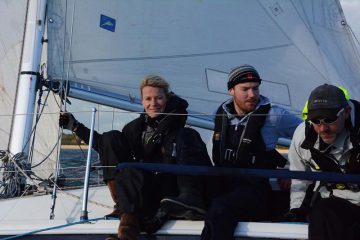 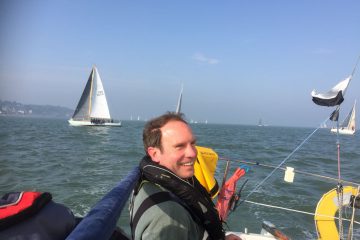