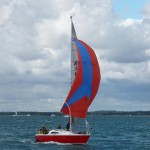 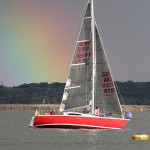 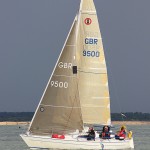 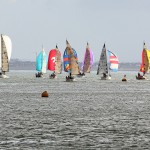 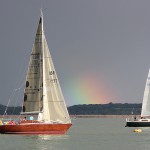 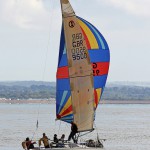 Three Impalas – Magic, Two Frank and Polly – entered the JOG race to Poole and back at the weekend. An early start off Cowes took place in a severe lack of breeze, despite threatening clouds and multiple rainbows in the offing, which combined with a strong spring tide made for an interesting downwind start. Yep, that’s right, the course was to Poole – the long way round.

A drift downwind towards the forts saw some position changes, with Magic gaining the upper hand by gybing into stronger tide on the Portsmouth shore. At Bembridge Ledge buoy the wind shut off completely, filling in again just as some crew were beginning to mutter about kedging. From here it built to a good 15 knots as boats short-tacked up the shore towards Shanklin. Off Dunnose Magic opted to go offshore, a decision which  paid off, as Polly found the breeze inshore was patchy to say the least.

As the fleet approached St Catherine’s Point the wind built to 22 knots, with a sweeping spring tide creating some enormous overfalls. Here it was time for a tack change to the No. 2, with the fleet’s bowmen earning their stripes as they battled with sailcloth under large quantities of green water. Snugged down with smaller jibs things became slightly easier, but off St Cats the overfalls got even bigger, with the motion so violent that Polly’s masthead instruments flew off. From here it was a case of clinging grimly on for the 25 mile fetch to Poole – but at least the sun was shining and 2 knots of tide were helping progress. As the finish mark off Poole drew closer crews began to think longingly of dry clothes and warm food.

Polly finished at 1641, over 8 hours and a lot of green water after the start, to take 1st overall. Magic followed in 2nd to make an Impala-dominated podium, with Two Frank finishing a creditable 5th. All crews deserve credit for finishing a brutal race – even if some did look with envy at the bigger, less submersible boats that overhauled us as we neared Old Harry.

Sunday’s return race was a much less violent affair, despite a cold autumnal rain squall at the start. A quick spinnaker leg saw the Impalas finished by 1320 and heading home for a well-deserved nap! Polly couldn’t quite get close enough to Elan 295 Raffles, who won by 18 seconds on corrected time. Two Frank was third, and Magic 7th.

A great showing by the Hamble Impalas in a tricky weekend of racing that encompassed flat water, big waves, and everything from 0.3 to 23 knots of breeze.