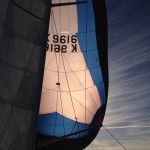 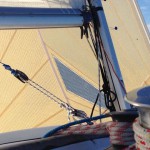 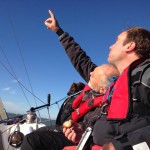 Day five of the Garmin Hamble Winter Series and after several weeks of no action, we finally we had the perfect combination, sun, a decent breeze, and 4 Impalas on startline in the 10 strong IRC Class. All boats found the unpredictably shift North Westerly 18 knots made tactical and sail choices tricky, and an extra dimension to the race was unexpectedly added by a tug, 100m of towline, and attached 200m barge which appeared on the second run and caused a certain amount of chaos!

Although Trudi shot off the line and maintained a lead all the way round the racecourse, on occasion the other three Impalas were all pretty close to her transom, enjoying some of the wonderful close racing the class is renowned for. At the finish the order was Trudi first Impala (and 3rd on Handicap), Imptish second, Two Frank third and Curved Air fourth. We all have our fingers and toes crossed that the weather gods will remain charitable for next week.