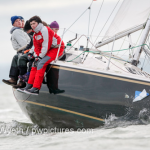 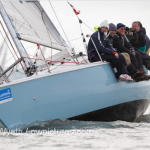 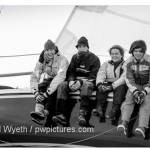 Photos: Thanks to Paul Wyeth/pwpictures.com

In the words of Two Frank‘s Olly Love it was a “Six person day” in the Garmin Hamble Winter Series if you were sailing an Impala. Shifty necessitating frequent tacks, gusty with a couple of tight kite reaches even though the max windspeed was 16knots. Trudi shot themselves in the foot at the start returning very late after being OCS. They made a remarkable recovery but couldn’t catch Two Frank who were first Impala (4th on handicap), Trudi were 2nd Impala and Imptish, who didn’t have six on board…were third. Hot chocolate and chips were enjoyed in the HRSC clubhouse after racing, particularly by the bowgirl of Imptish whose socks (and boots, and thermals) got rather wet halfway through the race.

One race remains before winter sets in for certain!