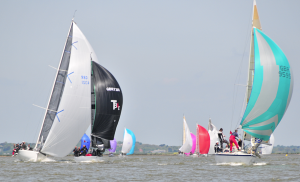 The River Blackwater estuary off Mersea Island in Essex was the venue for this year’s IRC East Coast Championship, held on 25th and 26th May in light to moderate breezes, and with some welcome sunshine.  Three races round windward/leeward courses were sailed on the Saturday, followed by two round-the-cans races on Sunday, with skippers discarding their worst result to count their best four scores.  The fleet was split into three classes, starting at five minute intervals, with Julian Lord’s Impala Scallywag GBR9595 competing in Class Three and taking four firsts to win the class ahead of Panic, a beautifully revamped quarter tonner.  In the overall fleet results, Scallywag finished in second place, just behind an X35 and ahead of a Rob Humphreys designed 36 footer.  So near yet so far, as Scallywag placed second overall in three of the five races, losing out by one second, six seconds and ten seconds to the winner in those races.

Class Two of the regatta also had an Impala connection, being won by Rob Leggett, who campaigned the Impala Monkey Business very successfully for a number of years.  He was racing in his new boat, the Contessa 33 Arctic Monkey.