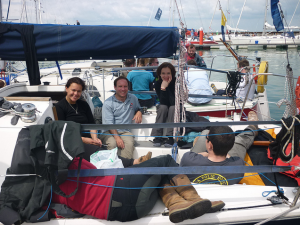 Imptish competed in her first ‘offshore’ races this weekend with her new owners Barney Smith and Graham Tullett. Engine troubles earlier in the week meant an emergency plan b had to hatched on Friday when the team borrowed a much used little outboard from the local repair shop. The good point of the new engine was that it worked, the bad point was that it only had a forward gear (more on that later!). On Saturday morning we motored to the start to join Vlad (the Impala) and the newly acquired Magic on the startline together with 13 other boats in class 5. Light winds meant the planned trip out past the Needles and round the Shingles was shelved in favour of some zig-zagging in the Solent. Magic and Vlad made a better start under kite but Team Imptish was back on form when we started beating to Yarmouth and soon pulled out a considerable lead despite our bowgirl injuring herself trying to dive off the foredeck! Luckily she had a change of clothes with her and we had a first aid kit to stick her hand back together. As the wind increased on the final leg Vlad began to reel us in finally crossing the line just a few seconds behind and ending with a better corrected time due to her lower TCF. The final results had Vlad in 2nd, Imptish 3rd and Magic 6th, an excellent showing by the three Impalas.

I’ll draw a veil over Saturday night’s proceedings in Yarmouth except to say that our poor crew of three ‘ shanghaied’ girls from Hamble River SC now know much more about the Isle of Wight’s geography. Next time we’ll take a look at a map before we try to walk to the pub for dinner!

Sunday morning dawned wet and rather more breezy. With Imptish snugly buried in Yarmouth harbour, bow pointing directly downwind at a very expensive Sunseeker and only a 3hp (forward gear only) outboard as motive power, our exit from the pontoon was somewhat tricky. We would now like to say a big thank you to the man onboard the neighbouring yacht who hauled our bow round 90 degrees on his own and allowed us to escape without a scratch! With a ridiculously early start time of 0830 certain members of the crew were showing their age (or was it their hangovers…) and it took a while for us to get the boat moving. Luckily for Team Imptish Vlad and Magic seemed to be just as asleep and we quickly pulled out a nice lead, swapping tacks with some of the bigger class 5 boats. Two hours of upwind sailing later we were past Cowes, very cold but luckily still in possession of a healthy lead over the other two Impalas. The final leg involved some tight spinnaker reaching…we now know what to do it a broach before we crossed the JOG finish line and congratulated ourselves on a fantastic weekend. Final results had Imptish 3rd, Vlad 7th and Magic 8th.

What did we learn from our first ‘offshore’ weekend? A few things…1) a working engine (with reverse) is useful, 2) you can never have enough food onboard, 3) the South coast of the Isle of Wight is actually quite close to the North Coast (and quick to walk to when you’re lost), and 4) racing Impalas is fun, and addictive. We’ll be back for more!