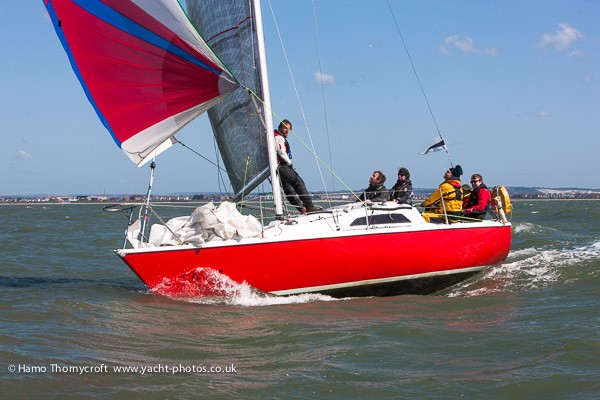 Magic in the JOG Nab Tower race – thanks to Hamo Thornycroft/yacht-photos.co.uk

For Solent based boats, the 2015 JOG Inshore Series started last Saturday (18th April) with the 35 mile Nab Tower Race. Starting from a line off Egypt Point in West Cowes, the course headed east between the forts built to protect the approaches to Portsmouth and Spit Head before turning South East to the Nab Tower which sits approximately fifteen miles due south of Hayling Island. Leaving the tower to starboard the course is then reciprocated back to Cowes.

This year, four Impala’s were entered for the race, making the class jointly the biggest one design represented alongside the Sigma 38s (there were 3 J109s and 2 Sigma 33s).

Racing in class six, the start was scheduled for 0730. The forecast was for a sunny day with around 16kts, gusting a little more from the east. In the event the wind speed at start time was well over 30kts and with that opposing a strong spring tide, the sea state was, by Solent standards, appalling. Later classes reported less wind and a calmer sea and it is perhaps ironic that it was the small boats who got the worst of the conditions.

Aiden Barr’s Cheeky Monkey quite reasonably scratched leaving Imptish, Magic and Two Frank to fight it out for the honour of first Impala. Sam Flint and Oliver Love were the next to withdraw from the ring. Starting the race with the fleet, they took a sharp right into Cowes after the gun and promptly retired in favour of a nice breakfast.

Magic was subject to an individual recall but unfortunately did not hear the call so was, unsurprisingly, among the front runners off the line, passing two Laser 28s and a She 36 during the beat down to Ryde. Imptish, short-handed with only three on-board made a more conservative start and soon found themselves alone as other competitors retired. The seastate was brutal and the gusts continued in the thirties. Both Impala’s had crews incapacitated with sickness but the boats bore the strain well.

A close reach back to the Solent allowed some respite and by the time the leaders bore away at Horse Sand Fort the seastate had calmed as the tide was now with the wind which was down in the teens. Magic finished sixth but after the imposition of a time penalty for being OCS she was reduced down to ninth. Imptish finished tenth.