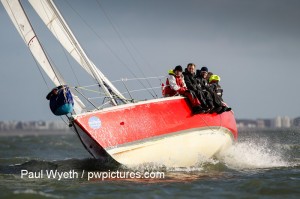 After last week’s lack of wind led to most of the fleet reading the sunday papers under an AP, the penultimate race of the 2012 Garmin Hamble Winter Series was a very different affair. The four Impalas in IRC 4 raced in a brief weather window between two 40 knot gales and torrential rain.

A seductive 10 knots and sun on the way to the start gave way in an instant to 18-27 knots as the race started. Polly was over the line with two other boats at the start, and had a major battle on her hands to climb through the fleet. This was some of the closest racing of the series so far, with positions changing continuously in some very testing conditions. Polly snuck through to take 2nd overall behind quarter tonner Menace. George Beevor and Olly Bewes’ Magic had her best result yet, with a well-deserved fourth overall. Trudi was close behind, with Imptish on her heels.

One race remains in the series – here’s hoping for a little less wind, and significantly less freezing cold rain!

We want your race reports from elsewhere in the country. Send them in – info@impala28.co.uk