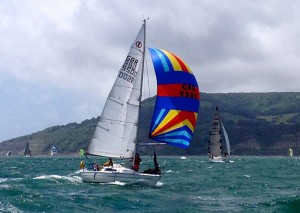 Two of the four Impalas entered made it to the startline of the Round the Island race this year. With a forecast predicting large gusts, there were some pre-race doubts aboard both Imptish and Polly, but on the day, the race was a blast. Polly opted for full main and no3, with Imptish choosing a few reefs. After a middling start, Polly slowly clawed her way back up the fleet. Conditions could be described as ‘lively’, with 14-20 knots on the first beat as the 1,600-strong fleet beat their way towards the needles with varying degrees of success. Once round the needles, a close reach, just too shy for a kite, took the fleet to St Cats for the start of a rollercoaster ride downwind to Bembridge. Big, rolling waves and up to 26 knots made life exciting, with Polly clocking 10 knots as she surfed up to Bembridge Ledge Buoy.

Now comes a long beat to Plymouth for the nationals in just under two weeks time. See you there!