Round the Island race 2015 results 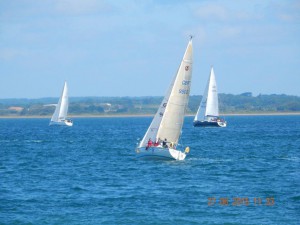 Barney Smith writes: ‘Imptish went round the Island on Saturday along with nine other Impala’s, the biggest class entry for several years. It was a great day. Sunny, windy, and glorious sailing. More of you need to be on the startline next year! The date is Saturday 2nd July 2016. Put it in your diary.

We were up and out of the river early to spend the pre-start period admiring the big boats in the sunshine. Eleanora was just lovely (google her)…maybe next year….once fully awake our 12 year old first time RTI crew member seemed to be impressed!
From our perspective the start was a bit of a shambles  eventually setting off a good 100m behind most of class 3 and therefore tacking all the way to the Needles in dirty air with a big focus on avoiding unpredictable course alterations and random shouts from bigger boats! The less said about the new hole in the no1 genoa the better but top tip 1 from me to Impala crew, please remember to skirt before you wind!
We’d recovered sufficiently by Goose Rock to enjoy a calm passage through Varvassi “gap” without another boat near us. The usual warning shouts from the lifeboats and ribs were conspicuous by their absence as was the regular sight of a big boat or two parked on a rock or wreck to guide the way.
The Needles to St Cats stretch was a lot of fun, surfing down waves at up to 10 knots chasing Polly who’d pulled out a bit of a lead on the initial beat, interspersed with a long debate on how far to go offshore. Then it all went a bit wrong as we turned dead downwind at the lighthouse for the leg to Dunnose. Memories have been wiped by now but I am told there were two nasty broaches and several messy gybes. At least one crew member threatened to resign  Top tip no 2, release six inches of pole downhaul before gybing in 20 to 25 knots, we didn’t…and it doesn’t end well….
Despite our mishaps we were a bit closer to Polly by the time we turned for Bembridge. As usual we set up to be on the inside at the bouy making our intentions very clear to the group of boats on the outside. We stayed very high on the reach to the Ryde Sands to keep clear wind, in the process missing at least one photo opportunity, and then skirted the Seaview exclusion zone with inches to spare. Next up was the tacking battle that is Ryde Sands. Just one sighting of 0.0 on the depth sounder this year and some great work by the crew to pull us back to within metres of Pollys transom on the exit. Top tip no 3 – start the tack on 3m as you go in, by the time you’ve tacked the depth will be less than 0.5 but should be above 0.0!
After that it was a drag race to the finish and we somehow found an extra gear – it must have been the extra round from the hungry box – and passed Polly to reach Old Castle Point a couple of hundred metres ahead. As always we stayed (very) close inshore navigating through the knocks and windless patches and so only having to do two short tacks to make the finish line just behind the much smaller Woof  or K9 – great match between sail number and boat name! – who ended up third overall and a couple of minutes in front of Polly.
Round the Island is an awesome day and has become the highlight of Imptish’s year. I can only encourage the rest of you to come along. There’s plenty of advice available on how to get the best out of the race. So please contact Ben Meakins or myself if you’re interested and we’ll persuade you to be on the startline in 2016!
Impala extracted results: