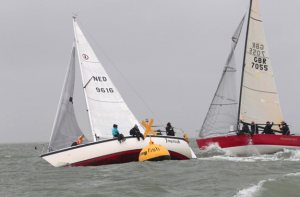 Over the weekend Imptish and Magic raced in the final event of the Royal Southern Yacht Club’s 175th anniversary regatta. Despite the June date the weather throughout was closer to those normally encountered in the Hamble winter series. Wet, cold and windy conditions dominated with gusts of over 30 knots leading the race officer to send the fleet home early on Saturday. Racing in a very competitive IRC 4 class Imptish was very lucky to finish second overall in the three race no discard series after scoring a fourth and two thirds behind a gaggle of very quick quarter tonners. Magic was never far behind ending the weekend sixth overall. Both crews also enjoyed a fantastic carribean evening at the Royal Southern on Saturday night. The £5 per person party tickets purchased food, lovely red baseball caps, and most importantly free rum and ginger beer for four hours! Please can we do the same at the Nationals?

Send in your race reports from around the country to info@impala28.co.uk!