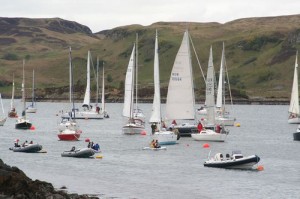 Lammergeyer kept up her good record in the Scottish Islands Peaks race at the weekend with another win in Class 3 making it a 1, 2, 1 over the last three years

This annual endurance event involves “sailing” 160 nautical miles and running around 60 miles with 10,000 feet of climbing up and down some of the most noteworthy hills in Scotland – Ben More on the Island of Mull, the Paps of Jura and Goatfell on Arran – before ending up at Troon. It’s a “first boat in wins race” event – none of this handicap nonsense.

The team of 5, two sailors and three runners, set out with a short running race round Oban on Friday, then sailed off on a rather slow spinnaker reach to Salen on the Isle of Mull. Despite a great run round Oban and a brilliant Le Mans style start, the team of Andrew McArthur, Andrew Shannon, Andrew Coulthurst, Roderick Grey and Alistair Gray (aka The Wild Goats – don’t ask, you’re far too young to know!) were overtaken on the sail by the larger boats who were able to take advantage of their waterline lengths in the light breezes. Lammergeyer being one of the smaller boats in the fleet at 28ft long.

Arriving at Salen, the runners were rowed ashore in the dinghy and headed up, and down, Ben More. A personal best later (5hrs 20minutes – we said this was a tough race), they came haring off the hill, flopped into the dinghy and headed for Lammergeyer expecting food and a nice rest as the boat sailed down to Jura. Little did they know!

Arriving in Jura 12 hours later after some adverse tides and light winds, the runners set off to run the Paps of Jura, again running a personal best of 5 hours 04 minutes. They left Jura at 2.45pm on Saturday for their next destination – Lamlash on the Isle of Arran. 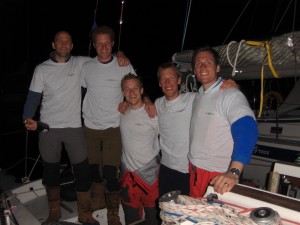 And so the team left Jura in very light winds often rowing at c 2.5kts. And they rowed . . . . and rowed  . . . . and rowed  . . .  and rowed for over many miles. Andrew Shannon was nearly thrown overboard for remarking that ‘looking on the bright side, at least they’d overtaken the heavier displacement boats as they could row much faster.’ He was only saved from being dumped into the Sound of Jura when the rest of the team remembered he was their best rower!

They eventually arrived at the notorious tidal gate off the Mull of Kintyre in the early hours of the morning, just missing the chance to get through at slack water. The tide change saw them drift backwards for six hours, the brisk breeze filled in and they hared off to Lamlash . . . finally reaching their destination 24 hours after they started, at 2.45pm on Sunday evening.

By now the team had been overtaken by other boats and the mood on board was dismal to say the least. The nearest rival and the leading boat in their class, Marisca – a Contessa 32, was well over an hour ahead of them and, with only one hill and the last sprint (13nm) to Troon left, things looked dire. But never say die, the team soldiered on.

The team’s run up the last peak, Goatfell, was in the dusk falling into night and, much to their surprise, was a very good time and another personal best of 4 hours 12 minutes, cutting down some of Marisca’s gains on the water. All was not lost as Marisca was now only an hour ahead of them and the wind was dropping away fast. Knowing they could row much faster than Marisca, the cry went up “To the oars” which elicited the response of “What do you think I am, a galley slave?”

Nevertheless, they set too and the slowest ding-dong battle ever seen between two boats got underway. Brisk rowing by the Lammergeyer team saw them overtake Marisca and leave her in their foaming wake as the wind remained elusive and the sea glassy. Then, as if the weather gods were having a laugh, the wind filled in for an hour or so and Marisca hared passed Lammergeyer and back into the lead.

Cursing like fury, our intrepid team set to out to chase Marisca hoping, rather oddly for sailors, for the wind to die away. The wind, having played its little joke, duly died away and Marisca was caught and passed. All that remained now was to keep going until Troon and the final sprint into the finish line.

Meanwhile on the quayside at Troon stood Jo (the boat’s owner) and Tim (Andrew M’s dad) having a gentle argument as to whether the shadowy outline they could see approaching the harbour wall was Lammergeyer. Variations on “It’s a masthead rig” swiftly followed by “No, it isn’t. It’s my boat” continued for some minutes until the shadow disappeared behind the bulk of the harbour wall. The watchers relocated to the outer harbour and watched a small green light lurch its way towards the harbour entrance – the rest of the boat being hidden behind the harbour wall.

A few moments later and one Impala 28 comes gently rowing round the harbour dolphin – leading its class home. Much jubilation ensued on the dockside but the race wasn’t finished yet. The final leg runners were dropped into the dinghy in the outer harbour and they paddled like fury off into the inner harbour to tie up and complete the final sprint into the office signing in at 12.15am (yes, that’s am) on Monday morning.

Read more about the race here, and here for a great piece of reporting from a local website and includes loads of photos.